Welcome on the Official Web Site 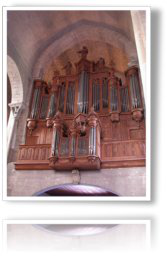 During Summer, about ten to fifteen organ concerts allow interpreters from whole world to perform on the Carcassonne St. Nazaire Basilica historic organ. Since 1985 more than 7000 listeners benefit from such privileged moments, as an hour of organ music every Sunday and holidays at 5:00pm in the prestigious romanic and gothic art jewel of St. Nazaire Basilica. Thanks to the State, the Historic Monuments National Office, the Territorial organizations and the town council of Carcassonne, a free entrance to these concerts is possible. In addition the generosity of "Amis de l'Orgue" members, private sponsors make feasible such a festival.

It is with great regret that we were not able to program the 2017 season of the Estivales d'Orgue de la Cité this summer, due to the announcement by the DRAC Languedoc-Roussillon of important works in the Basilique Saint-Nazaire & Saint-Celse as of April 2017.

Many of you regret it, but thanks to the availability of Pierre CAMBOURIAN (Organist), we were able to schedule an exceptional concert on Sunday, July 23, 2017 at 5 pm.

We hope that you will come to witness the interest and attachment you bring to this musical event that has been going on for 32 years. We look forward to seeing you on Sunday, July 23, 2017!

Pierre Cambourian approaches the learning of music by the piano, the trumpet then the organ. After brilliant studies at the Conservatoire National de Région (CNR) in Tours, he studied with Marie-Claire Alain at the CNR in Rueil-Malmaison and Paris. He continued his training at the Conservatoire National Supérieur de Musique in Paris (CNSM) where he was awarded unanimously the first awards of harmony, counterpoint, fugue and forms in the classes of Messieurs Raynaud, Henry and Escaich. He then followed the cycle of organ development directed by Michel Bouvard and at the same time obtains the prize for improvisation at the organ with Thierry Escaich. Pierre Cambourian is a prize winner of the Praetoria International Organ Competition and a prizewinner of the Meyer Foundation. He regularly performs in Europe, both in solo recitals, as a soloist with major national or international orchestras, or with a Orchestral or vocal ensemble, duo or any other training. Its attraction for the related arts led to it also offering transversal dance and organ concerts, recitals and organ concerts, as well as exhibitions Painting and Organ. An eclectic musician, his discography is regularly hailed by various musical critics and illustrates the different periods from the Renaissance to the present day. Also, he recorded a very noticeable program on Jean-Sébastien BACH Harmonique for Franco-Belgian television (Arte, Mezzo, RTBF). A liturgical organist, he was the holder of the great organ and choir organ of the Saint-Vincent de Paul church in Paris. In particular, it was possible to hear him (and see him) during the visit of Benedict XVI to Paris, since he held the organ during the pontifical liturgical mass on the Esplanade des Invalides in September 2008. Holder of the certificate of fitness for office Professor, he teaches writing and holds the functions of academic adviser (deputy of the Directorate) at the Gabriel Fauré Conservatory of the 5th arrondissement of the city of Paris. Recognized improviser, Pierre Cambourian is also a composer. In addition to his pieces for organ, choir, voice, trumpet, saxhorn, as well as numerous arrangements for various ensembles, his "Mass of Saint Vincent de Paul" * is sung in many francophone countries and in 2011 he won the composition contest Liturgical (Francophone) organized by the diocese of Creteil with its "Saint Victorian Mass" ** - created on Sunday 9 October 2011 in the Cathedral of Creteil.